What are gender norms and how do they relate to social norms?

The terms ‘social norms’ and ‘gender norms’ are becoming more common in development research, policy and practice. While they are not new, they are used increasingly in discussions on gender equality.

In the past, norms were often ignored as ‘too complex’ to address, as an inevitable part of culture and outside the scope of development activity, or just ‘the way things have always been’. But now, social norms and gender norms are being actively addressed by actors in international development and social justice work, including those working on economic empowerment, ending child marriage, improving sexual and reproductive health and enforcing human rights law, among many other issues. This growing focus on norms is an opportunity for innovation to promote gender justice.

Social norms
Social norms are the implicit and informal rules that most people accept and follow. They are influenced by our beliefs, economic circumstances and sometimes by the rewards and sanctions we might expect for either adhering to or disobeying them. Norms are embedded in formal and informal institutions and produced and reproduced through our social interactions. They only change when enough of us choose, or are compelled, to act in a different way, creating a new norm.

Gender norms
Gender norms are a sub-set of social norms. They describe how we are expected to behave as a result of the way we or others identify our gender. In most contexts, gender norms are framed in binary terms (female and male) and erase non-binary or gender-fluid identities.

Gender norms often reflect and reinforce unequal gender relations, usually to the disadvantage of women and girls, but also to those men and boys and people of diverse gender identities who do not conform to prevailing gender norms. Gender norms intersect with other norms and inequalities related to age,  race and ethnicity, class, disability, sexual orientation and religion, among other factors.

How do different disciplines understand social norms and gender norms?

‘Social theorists, including anthropologists, sociologists and feminist scholars, have tended to conceptualise norms as rules of behaviour at the level of culture or society. Gender norms exist in the world, including outside of the individual’s mindset.

Through various mechanisms (including socialisation in the family, the media and through other institutions such as schools and religious bodies), gender norms are learnt and can be internalised as well as being represented and enforced through the institutions of society.

Other disciplines, such as social psychology, philosophy and behavioural economics, have tended to define social norms as people’s beliefs about what others expect of them. Norms thus exist primarily inside the mind. Both perspectives have value; they differ, however, in how they understand and conceptualise the path to norm change.’

The table below (adapted from Cislaghi et al. 2018) captures the different approaches.

The two approaches are converging. For example, approaches inspired by behavioural science, which had implicitly assumed that people were free to adopt new norms and behaviour, are now paying more attention to power dynamics and the institutions that constrain behaviour and norm change.

People working on gender norms are also taking greater note of behavioural science insights about how people’s perceptions of what other people think and do influence what people actually think and do.

Other disciplines such as political science also offer important insights around the influence of norms on people’s lives. Political scientists consider how ‘norm entrepreneurs’ such as local human rights activists and 'transnational advocacy networks' can leverage opportunities, including political and economic change or the commitments made by states (through international treaties and conventions, for example) to promote or encourage the adoption of new social norms.

How do gender norms change?

While some gender norms are rooted in religious or cosmological beliefs, or are seen as part of an overall world view, others have shallow foundations, are based on the immediate situation, and may be more easily changed.

These theories shed light on the relationship and tensions between individual attitudes and behaviour and norms that are held collectively, as well as how norms can enable societies to function smoothly. For example, norms help to remove uncertainties, give order to societies and consolidate power hierarchies.

They also highlight the role of individuals and social networks in both influencing how people behave (in order to comply with norms) and in spreading new ideas and ways of doing things that can change norms when they are adopted by enough people.

Sociological and economic analysis
Sociological and economic analysis has explored the drivers of norm change at two levels: institutions, and the broader society of which they form one part. Drivers of norm change include: economic development, urbanisation, the spread of education or technological change, and social or political movements. They also include changes within religious institutions, local societies and peer and interest group organisations, to name a few institutional forms.

Drivers at these levels tend to change the context in which people make decisions about their own life (and livelihood) and their children’s lives. They do so by creating new economic opportunities, exposing people to new information or ideas, or creating new means of communication.

In some cases, existing norms can prove highly resistant to change (e.g. where norms about women’s primary place being in the home stop them taking up growing economic opportunities). In other cases, old norms underpin the development of new norms (e.g. where increased educational opportunities have helped create a norm whereby both girls and boys attend secondary school).

Norms may also change as a result of deliberate efforts (see section on what practices and policies can be used below).

Resistance to norm change
While some norms appear to change with little resistance, others are much more strongly contested. Strong resistance to gender norm change may reflect the influence of deep-seated religious or cosmological world views about the roles of men and women in society and, therefore, how girls, boys, women and men should behave. Or it can represent a reluctance to give up the power held typically by men (or certain groups of men).

Resistance is also more common where discriminatory gender norms are upheld and promoted by institutions such as the media, schools or religions, or political movements that mobilise to defend ‘tradition’ and oppose gender equality.

What practices and policies can be used to challenge harmful gender norms?

There is growing evidence that some approaches are more effective in challenging harmful gender norms than others. These include approaches that:

Initiatives to change harmful gender norms target different audiences. For example, some aim to change attitudes and norms among adolescents and young people. The most effective programmes generally also aim to change norms among the people who have influence over adolescents’ lives, such as parents, community leaders, religious leaders or politicians. Evidence suggests that norm change processes are more effective when:

Many of these topics are explored in the ALIGN resource hub and are discussed in ALIGN thematic guides.

How do we know if norms are changing?

Changes in gender norms may be readily apparent from changing discourse in the media and, more broadly, across  society. For example, the rise of the #MeToo movement or the movement against gender-based violence in India signal pressure for a shift in norms about what is acceptable and unacceptable behaviour.

Norm change may also be inferred from indicators of broader social change, such as reductions in the gender pay gap or increased use of contraception, even though significant changes of this nature may have a number of drivers.

Research to understand whether and why norms are changing is always needed, particularly where people’s personal attitudes or behaviour appear to be out of step with gender norms. To understand whether norms are changing and how, it is helpful to combine qualitative and quantitative research and to take a long-term view (over a generation or more), as norm change processes can be slow. One good example is Naila Kabeer’s analysis of changing gender norms in rural Bangladesh.

Taking a long-term view raises an important challenge for evaluations of norm change initiatives, as these usually take place shortly after the end of a project and often stress  the need for more follow-up evaluations after a number of years. Some project impacts may only be visible years later, or after more consistent, long-term support for change.

Some approaches to measuring norm change focus on proxies, such as outcomes or attitudes; others aim to measure norms themselves by examining perceptions of appropriate behaviour in particular circumstances.

Where can I find out more about gender norms?

Learn more in our section on understand norms and norm change, and visit the ALIGN resource hub for an extensive set of recommended resources on gender norms searchable by theme, content type and language. You can also find out more through ALIGN's flagship report on gender norms - Gender, power and progress: How norms change, which was released at the end of 2020.

Below are some further background reading resources that explore social norm and gender norm theory. 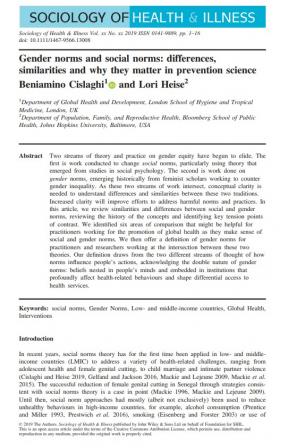 Published by: Sociology of health and illness 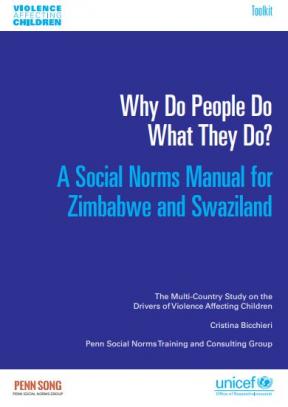 Why do people do what they do? A social norms manual for Zimbabwe and Swaziland
Authors: Cristina Bicchieri, Penn Social Norms Training and Consulting Group 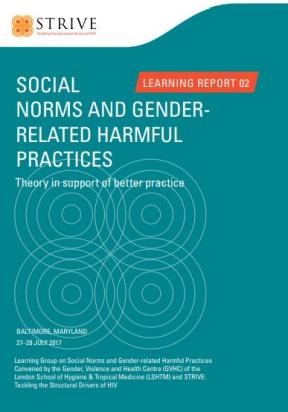 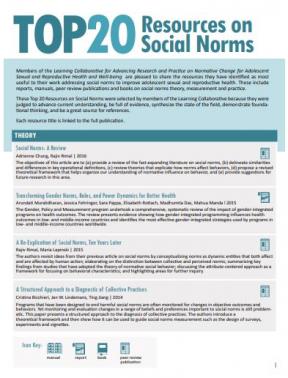 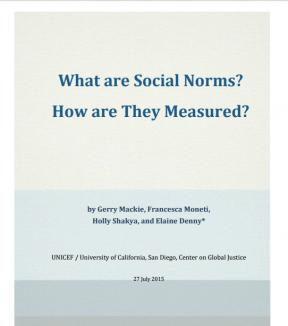 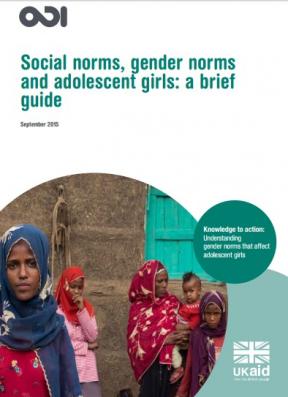