Understanding how gender norms intersect with other identity-based norms is critical to ending identity-based discrimination and marginalisation. It is widely recognised that gender norms vary between different cultures. Now there is a growing focus on the ways in which different aspects of people’s identities and social position (such as race, ethnicity, age, ability, socioeconomic class, sexual orientation, gender identity and location) underpin inequalities within diverse cultures and intersect with gender norms.

The need to understand intersectionality has several implications. First, it means that we need to understand the gendered stereotypes held by dominant groups in relation to different marginalised groups and how these translate into unconscious bias and norms of behaviour. In many white-majority countries, for example, gendered stereotypes and biases about Black children underpin lower teacher expectations for them, and their harsher treatment in schools than children from other ethnic groups, contributing to often lower education outcomes.

Second, it means challenging these stereotypes, biases and norms. That, in turn, means understanding how laws and policies interact with stereotypes, biases and norms to reinforce or challenge discrimination and inequalities. We need to understand the gendered norms among different marginalised groups themselves, which are often overlooked in broad-brush analyses of gender norms that tend to refer to an ‘idealised’ dominant culture or social group.

And third, it means that all norm change efforts must be grounded in the principle of the disability rights movement: ‘nothing about us without us’. Initiatives must be co-designed and implemented with, and incorporate the voice and experience of, affected groups.

The resources on these pages aim to help readers develop a clearer understanding of the ways in which different identity-based inequalities interact with and influence gender norms and discrimination. We welcome suggestions for other materials, blogs, case studies and more.

The intersecting norms of gender and caste in South Asia
Author: Priya Narayan

The expectation of perfection: interview with Nidhi Goyal on the intersection of gender and disability norms in India
Author: Nidhi Goyal 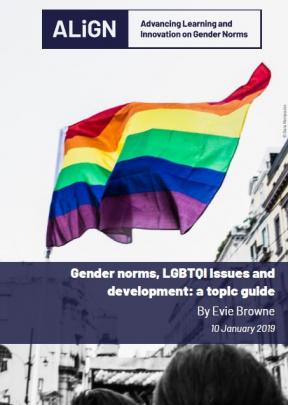