What shapes gender attitudes among adolescent girls and boys? Evidence from the UDAYA Longitudinal Study in India

The role of gender norms in shaping education and work opportunities, distribution of power and resources, and health and wellbeing is well recognised. However, rigorous studies in low- and middle-income countries on when and how norms change over time and what factors shape adolescents’ and young adult’s gender attitudes are limited. This paper explores the factors that determine adolescents’ gender attitudes, as well as patterns in gender attitude shifts over time among younger and older adolescent boys and girls in India.

Data presented in this paper were drawn from a unique longitudinal study of adolescents aged 10–19 (Understanding the lives of adolescent and young adults–UDAYA study) in the states of Bihar and Uttar Pradesh in India, conducted during 2015–2016 (wave 1) and 2018–2019 (wave 2). The analysis presented in this paper drew on data from 4,428 boys and 7,607 girls who were aged 10–19 and unmarried at wave 1 and interviewed at both rounds of the survey. We used univariate and bivariate analyses to examine changes in adolescents’ gender role attitudes over time and the association between explanatory variables and gender role attitudes. We also used linear fixed effects regression models to identify factors that shape adolescents’ gender role attitudes.

Gender role attitudes became more egalitarian over time among boys and girls, except among the older cohort of boys in our study. Among both younger and older cohorts, girls/young women held more egalitarian views than boys/young men and this pattern held over time for both cohorts. Factors that influenced gender role attitudes differed for younger and older adolescents, particularly among boys. While some predictors differed for boys and girls, there were substantial similarities as well. Gender attitudes were affected by factors at the individual, family, peer, and societal levels, as well as by community engagement.

Our findings show that it is possible to shift gender attitudes toward greater equity and, in so doing, contribute to improved health and rights. 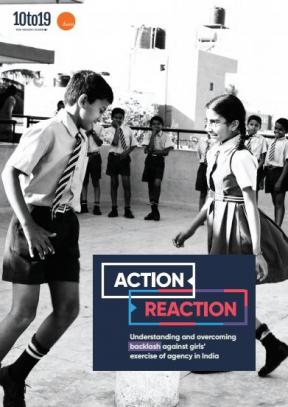 Action Reaction: Understanding and overcoming backlash against girls’ exercise of agency in India