Restrictive gender norms shape the ways in which Indian adolescents navigate and visualise their lives. Adolescents are pulled in different directions and influenced by the views held by their peers, friends, family and teachers, and promoted by popular culture. From December 2015 to October 2017, BBC Media Action and UNICEF’s Communication for Development programme worked together to create a multi-media initiative to challenge discriminatory norms and stereotypes in India. It targeted adolescent girls and boys aged 10-19 and their parents, and to boost adolescent’s self-efficacy and to start a discussion around harmful, and deeply-rooted, gendered expectations.

The initiative covered four main themes – adolescent health and child marriage, education, nutrition, and gender – all of which directly affect adolescents’ self-perceptions and how they critically interpret gender roles. Popular genres and storylines were used to engage a wide range of demographic groups and introduce new perspectives surrounding gender norms.

The initiative involved five main components which went out to target and secondary audiences in parallel i.e. adolescents and their parents, as well as other key influencers such as teachers, grandparents etc. The five components were: 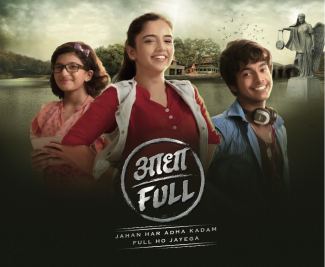 AdhaFULL: an adolescent-centric television thriller, featured the struggles of three adolescent detectives - Kitty (16), Tara (11) and Adrak (15), set in the context of a range of issues from child marriage to challenging gender roles and stereotypes. Stories ran over three day blocks and ended on a cliff-hanger, to encourage audiences to watch the next episode. The show ran for 78 episodes on the public service ‘DD National’ channel. It was also available as catch-up viewing on some free-to-air services. The show challenged gender stereotypes and promoted self-efficacy amongst adolescents. As a way of connecting with its audience, the show also produced six original songs containing social messages, and was promoted heavily on TV via celebrity campaigns.

Full on Nikki (FON): an upbeat radio show, featured in-depth discussions issues such as gendered societal pressure, education, health, independence etc. It functioned as a space for adolescent voices and ensured their priorities were included within the public agenda. The radio show had 78 episodes and was broadcast over All India Radio (public service broadcaster), private FM channels and selected government and private schools. The show was led by RJ Nikki, a fictional character, who moderated discussions amongst influential public figures including experts and celebrities. The radio and TV shows constantly referred to one another and RJ Nikki was disclosed to be Roshni, a key role model and teacher in the final episode of AdhaFULL. 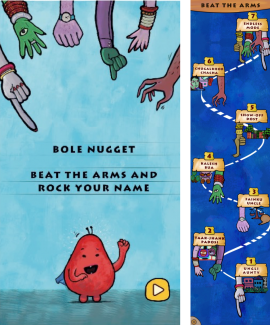 Nugget: an easily accessible, running-based mobile game featuring a relatable unisex character running away from “societal barriers” symbolised by gamified hands. The game links back to AdhaFuLL as the gamified hands are all characters from the show and the main soundtrack is also part of the game. The game was built to ensure its compatibility with cheap handsets given the varied socio-economic background of its target audience. Besides reiterating the importance of breaking free from social barriers to self-growth, the game served a common discussion point on gender norms among adolescents and their parents.

Interpersonal Communication (IPC) Toolkit: All activities were designed to be carried out in youth groups, schools, hostels etc. They were intended to integrate new ideas into the day-to-day lives of 10-14 year olds in rural and semi-rural areas. Central to the IPC toolkit was the promotion of ten core life skills amongst adolescents. The toolkit is comprised of:

#BHL (bigdi hui ladki/ladka i.e. girl/boy “gone bad”): a social media campaign aimed to re-claim “disobedience” to unacceptable gender norms, generate content and spark conversation. This section of the initiative was aimed at people aged 15-24 years in urban areas, who commonly use social media as a part of everyday life.

There were two impact studies which together gave a strong picture of AdhaFULL’s impact:

Study 1: An evaluation study commissioned by UNICEF (NMRC, 2018), consisted of 4,000 interviews with adolescent boys and girls, and 1,000 interviews with parents conducted in five states. The survey compared viewers and non-viewers, but without baseline data from before AdhaFULL was broadcast, findings can not be definitively attributed to the series. Nonetheless, the study found substantially more gender equitable beliefs, and intentions to behave in non-stereotypical ways or to challenge constraining norms among both boys and girls who watched AdhaFULL than among non-viewers. For example:

Overall, this evaluation showed that deeply entrenched norms around gender exist. For example, a quarter (25%) of parents would not allow their daughter to use a mobile phone, but did not restrict their sons. It also highlighted the constraining impact of prevailing norms on adolescents’ and parents’ decision-making. While 80% of adolescents saw no problem with adolescent girls and boys being friends and interacting in public, only 40% would continue a conversation if a teacher expressed disapproval. Almost 70% of parents reported that they would prevent adolescent boys and girls interacting in public because of perceived public pressure, with no difference between AdhaFULL viewers and non-viewers.

Study 2: Conducted by BBC Media Action (2019), involved a randomised control trial (RCT) to understand the impact in a controlled setting, and understand how far changes observed could be attributed to AdhaFULL. This RCT was conducted with 958 participants aged 15 to 19, half of whom watched two AdhaFULL episodes, while the control group watched Lapataganj, a show with a similar storyline but without the social messaging. Post-viewing surveys found that:

Mass media plays a central role in shaping young minds. Societal stigmas and hierarchies can be challenged through entertainment in different formats. AdhaFull and related activities exposed adolescents to alternative ways of thinking about gender. Viewers in the main considered characters relatable and inspiring, though the evaluation suggested some modifications for future episodes, such as toning down Kitty’s impulsive behaviour to make it more acceptable to parents, making Tara challenge discrimination more strongly and evolving Prince’s character to be more of a role model for boys. The characters and storylines enabled them to recognise and challenge gender norms and expectations and engage in debates with their peers and families.

Girls have more challenges than boys in negotiating around their aspirations and wishes and therefore it will take more time to witness change with this group. Entrenched gender norms continue to constrain parents who, in principle support more egalitarian approaches, as depicted in AdhaFULL shows, but at the same time, fear community criticism if their daughters are seen in public behaving in non-traditional ways. Extended implementation over a prolonged period on popular and widely viewed channels is likely be required to contribute to long-term normative change.