Getting men to care: An ALIGN-sponsored event in Rwanda

A group of researchers and activists from a dozen countries recently convened in Kigali, Rwanda, to talk about a topic often missing from events focused on gender issues: getting men to care. The specific focus of the conversation was how to get men to care about the unpaid domestic work that is – everywhere in the world – carried out mostly by women.

The two-day event debated the systemic gender norms that deter men, and particularly fathers, from playing an active role in the everyday care work that is so often left entirely to women. It was led by Promundo, a global leader in promoting gender justice and preventing violence by engaging men and boys in partnership with women and girls, and the Rwanda Men’s Resource Centre (RWAMREC),which promotes gender equality and the prevention of gender-based violence in Rwanda, and supported by the Advancing Learning and Innovation on Gender Norms project (ALIGN).

According to Promundo, women spend more than three times as much time on care work as men. Meanwhile, women with children earn far less money than men, and less than women without children. The World Bank has calculated that, as a result of this pay gap, countries worldwide lose $160 trillion in lifetime earnings. 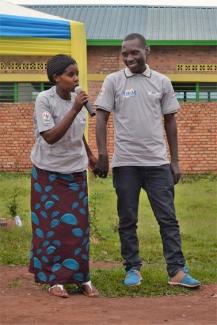 With the burden of women’s unpaid care work fuelling the gender pay gap, inequality in leadership and the disempowerment of women, the experts at the conference agreed that it is vital to understand how to encourage men’s unpaid work, and challenge the social and gender norms that keep them from doing their fair share. So how does this happen?

Study after study suggest that men want to care. From the multi-country International Men and Gender Equality Survey (IMAGES) studies, we know that most fathers in most countries would happily spend less time at work to have more time with their children – if it didn’t cost them, both financially and socially.

IMAGES also tells us that in every region of the world, both men and women think that caregiving, such as changing diapers, bathing and feeding children, is women’s work. Both men and women believe that women are better caregivers. Most men identify themselves as, first and foremost, as ‘provider, rather than ‘father’, while most women with children see themselves first as ‘mother.’ And most men and women believe that others share these views, too. In other words, gendered social norms hold men back from playing a more caring role.

But norms can change. And the evidence shows us some ways forward. For example, men whose own fathers provided more of their caregiving (or ‘women’s work’) are 1.5 times more likely to be involved fathers themselves.

Men with more equitable attitudes, who were taught to care for younger siblings, whose fathers cared for them, who were not exposed to violence, who are younger, who work fewer hours, who took paternity leave, and whose partner (i.e., their child’s mother) worked all provided more care in the household than other men who didn’t share such a background.

There are numerous examples of programmes and policies that can support the wider environmental factors that can encourage men’s participation in care, such as parent training; workplace policies, including parental leave and paid child care; and women’s economic empowerment and poverty alleviation programmes.

Promundo’s Program P training, which has a gender-transformative parenting component that has been tested in many countries, promotes men’s involvement in maternal and child health and an equal division of household labour and caregiving. It has been proven to increase men’s abilities as caregivers, promote positive communication between partners, and reduce parental and family stress and violence. Program P has empowered tens of thousands of fathers in 22 countries worldwide and has been officially adopted and scaled up by health ministries in five of these - Brazil, Chile, Nicaragua, Rwanda, and South Africa.

We got to see the effects of Program P first-hand through a site visit during the conference, when we traveled to Rwamagana to meet with participants of the Bandebereho programme. One woman shared how much she loved the fact that her husband came home from a RWAMREC training session and tried to cook dinner, and laughed heartily when telling us that he put the tomatoes in the cooking pot before the onions. No matter, she said, "the food always tastes better when someone else makes it." 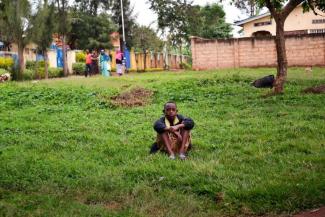 Another couple shared their story, with the husband admitting that he used to drink heavily and beat his wife. After just one training session, he realized he needed to stop and become a supportive husband. His wife recounted how he spent hours trying to make a fire in the rain so that she could cook, while she watched in a happy shock – in a dry room.

While we listened to these and other stories, young boys from the village sat nearby listening, and perhaps learning that indeed, men can care.

For more perspectives on male engagement in care work, look out for the State of the World’s Fathers 2019 report, which will reflect results from the important discussions in Kigali.

A briefing paper from this convening, produced by Promondo, is now available.

What the experts thought

Read what several of the participants, including from Promundo, Dove Men+Care at Unilever, UN Women, Gendes and Plan International, had to say about the event. 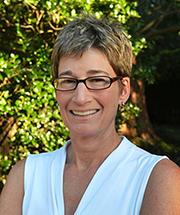 Suzanne Petroni founded the consultancy, Gender Equality Solutions, in 2017 to support donors, governments and civil society to design and implement high-quality and gender-equitable global health and development programs. She brings nearly three decades of experience in the governmental, philanthropic, nonprofit and research sectors, and holds a doctorate in Gender and Social Policy from George Washington University, a master's in Foreign Service from Georgetown University, a bachelor's in International Relations from the University of California at Davis, and a certificate in Public Health in Complex Emergencies from Columbia University. She currently serves as the Convening Fund Lead for the ALIGN Programme.

Stepping stones for street youth and Build your life up