Skip to main content
A family spending time with their child. ©ICRW

World Contraception Day: Why men must be part of the story

Many barriers stand in the way of young people who want to make informed choices about their sexual and reproductive health. World Contraception Day is a good moment to remind ourselves that in some countries, such as India, pre-marital sex is still frowned upon, and is seen as a challenge to the sanctity and structure of the family.

This bias is not confined to households, it extends to health systems and providers as well, and limits access to and the use of contraceptives by unmarried youth. Even for newlywed young couples, whose sexual relations are seen as ‘legitimate’, the use of contraception is not seen as acceptable until the birth of their first child. In fact, decisions around family planning and use of contraceptives are not seen as a matter of individual choice or a couple’s preferences, but as a matter for the wider family. These decisions should also meet certain parameters: in particular, they should prove fertility and (ideally) produce a male child within the first year of marriage. Family planning decisions are shaped by norms around marriage and fertility, and every act is viewed through the lens of these norms.

Added to these are norms on masculinity that give some individuals greater privileges and entitlements, and this often determines who has the greater say, and on what aspects of life. The power dynamic in households tends to be lopsided, tilted in favour of those who command a higher status in terms of their age, gender and ownership of resources. These are usually men.

With power comes decision-making authority, as it is often men who decide when to have children, and how many to have. In keeping with this skewed power equation, the decision to use a contraceptive is usually made by men, while the burden of using them and bearing the side effects of certain methods is carried by women.

According to data gathered for India’s fourth National Family Health Survey, 31% of young men aged 15 to 19 and 37.3% of those aged 20 to 24 reported that contraception was a woman’s business and men should not worry about it. These attitudes trickle into the dynamics between spouses and influences their sexual behaviour, expressions and contraceptive decisions, often throughout couples' married life.

Given that India is expected to become ‘the most populous country in the world’ by the end of 2025, we need a sharper focus on the missing half of this conversation:  the men. We need to understand their role in these decisions, so that it can be re-imagined.

A 2014 study on masculinity in India found that 32% of men overall exhibited rigid masculinity: ‘they not only exercised excessive control in their intimate relationships, but also believed that women and men are unequal and held negative attitudes about gender equal norms’.

This rose to 38% among men aged 18 to 24. The same study found that 27% of men in that age group said that a woman’s most important role is to produce a son for her family; 54% said that their wife cannot use contraception without their permission; and the majority (56%) claimed that a woman should tolerate violence for the sake of her family.

To gain a better understanding of what is happening here, our recent review, It’s on him too: Pathways to engage men in family planning, has synthesized current evidence on the motivations for – and barriers to – male engagement in contraceptive use and family planning. The review makes it clear that choices about contraceptive use and family planning are determined, very largely, by the inter-relations of knowledge and power. Knowledge encompasses the information that individuals or couples possess about contraceptive methods and their use, the available options, their side effects, their management and more.

Given the skewed focus of health systems, as well as civil society programming on women, it is often women who have more knowledge on contraceptives and related issues – a fact that can complicate the dynamics within a couple. In India, for example, almost all frontline health workers are women and the ways in which they interact with families are geared towards the needs of women and children, not men.

Unbalanced gender roles can lead to feelings of inadequacy among men whose female partners have greater knowledge, or more access to information (via front line workers). This, along with the pressure on a man to play the role of provider and procreator, can lead to haste, indecision and even violence against women.

The exclusion of men from health systems programming and initiatives has kept them on the margins of this story, with little investment in enabling them to reflect on the pressures and struggles of rigid norms around masculinity. While there have been sporadic attempts to engage men in family planning programming through sensitisation, sterilisation camps and limited counselling, these efforts have not been systematic or sustained.

Enabling men and women to access information, empowering them to communicate with each other in a way that is more gender equitable, and helping them envisage a life as equal partners has the potential to become the mainstay for messages on contraceptive use and family planning. Our review of the evidence suggests that such approaches may allow men to work with their partners to co-create a ‘safe space’ within their relationships, alongside their partners, building greater accountability for the adoption of safe sexual and contraceptive practices and for planning around childbearing. They can influence the negotiating space in relationships, particularly for those who are young (married or unmarried) sexual partners, and pave the way for women to exercise greater choice and agency within their relationships. Finally, they could also help to reduce sexual and gender-based violence within sexual partnerships.

Crafting gender-responsive, frontline implementation of family planning programmes could have a ripple effect on spaces within communities, families and intimate relationships that can be hard for young couples to navigate. This could increase their chances of living the life they choose, and building a family when they decide to.

On this year’s World Contraceptive Day, we call on all developmental organisations, corporations and policy makers working to improve choice around contraception to focus their efforts on gender equitable communication as an empowerment strategy. This could enable couples to make more collaborative decisions by easing the pressure on both partners and creating a space where they can negotiate and communicate openly, free of assumptions. A sustainable and collective effort in this direction may well change the face of family planning programming for the better.

The International Center for Research for Women (ICRW)

The ICRW is a global research institute, with regional hubs in Washington D.C., United States; New Delhi, India; Kampala, Uganda; and Nairobi, Kenya. Established in 1976, ICRW conducts research to identify practical, actionable solutions to advance the economic and social status of women and girls around the world.

ICRW Asia works on a range of issues such as access to education and livelihoods, adolescent empowerment, gender-based violence, masculinities, gender inequitable attitudes, HIV, and violence against women and girls.

Couple Engage is a two-year (2018- 2020) project led by ICRW, in partnership with Vihara Innovation Network and funded by the Bill & Melinda Gates Foundation. The project seeks to test approaches on male engagement for spacing methods in the states of Uttar Pradesh and Bihar using an evidence-driven approach through literature review and human-centred design. The blog is developed from the learnings and insights from this project. 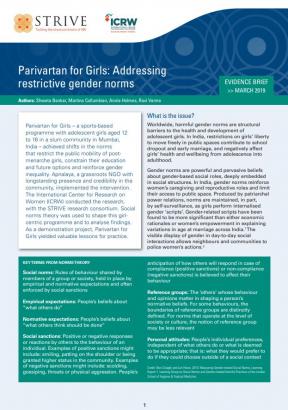