As the dust of 8,000 departures settles over Vancouver, we can now ask what lasting impact this year’s Women Deliver conference, with its theme of ‘Power for Change’, might have. For 80 percent of the delegates from 165 countries, this was their first-ever Women Deliver Conference, and a large youth contingent injected boundless energy into four exhausting days. Delegates were treated to an almost overwhelming mass of events: 100 formal panel sessions each day and an endless array of informal talks, lectures, virtual reality experiences, films and immersive classroom-based sexuality education lessons.

They queued for hours to get a glimpse of Canadian President, Justin Trudeau. His announcement of an annual increase in spending on the health of women and girls worldwide, from $1.1 billion to $1.4 billion was met with thunderous applause.

Was it worth the carbon miles?

Like many, I have sometimes doubted the lasting impact of this type of global gathering. The costs and carbon miles are immense. Information overload is the norm and by day three delegates were slumped against walls, throwing off shoes to rest their weary feet and napping between sessions. However, we should take a longer-term view.

The first observable impact was the immense energy, especially but not only, from the youth delegates . We all need inspiration, especially in these dark days of populism and Trump, and the fuel to re-ignite feminist movements was readily available. Young people not only shared their knowledge and concerns, but also learned from those who had blazed a trail before them. If inspiration could be seen as light, hundreds of iridescent trails are now being forged across many countries. There is good evidence of the importance of social movements in fostering and driving change and important seeds of change may have germinated in Vancouver.

The second impact stems from the conference tag line: How will you use your power? It is encouraging that this language is finally acceptable on a global stage.

Thirty years ago, I talked to a World Bank economist about the structures of power for just a few minutes before we realized that we were talking at cross-purposes. I was talking about de-constructing societal powers, while the economist was talking about the construction of hydro dams and energy pipelines. Power is at the centre of every interaction, yet is too often neglected in ‘development’ work because it is ‘not our business’. But there is a growing recognition of the need to address power relations to achieve societal progress. And now, finally, we have a major international conference banging the drum to challenge patriarchal gender norms.

There have been many steps along the way. Grindingly hard work in community development, in participatory development and learning and action; careful analysis of society and measured communication of the many different types of power: power to, power over and power within, for example. There have been power ladders; power analysis; power cubes; power tyranny (in reference to participation) power defence and power transformation. There has been so much discussion of power and participation that it is surprising so few people are familiar with the concepts and literature.

And there has been a realization that the neglect of – or as Amartya Sen puts it, the ‘comparative indifference to’ – the importance of the social, ‘needs remedying’. Sen’s 2004 recognition prompted a new generation of economists to broaden their understanding of society.

But beyond simply recognizing that the social is important, this conference went much further. It's not just society but patriarchy and dominating coercive power which holds us back.

Did Women Deliver 2019 deliver a sound understanding of patriarchy and gender norms?

Certainly, the sessions I attended knew all about norms. They used the language of norms; understood what is meant by shifting norms, and recognized that power was at their centre.

The plenaries did not shy away from calling out patriarchy. Trudeau’s urging that we should ‘Use the power you have to empower others’, became much more direct in the words of Oxfam International’s Executive Director Winnie Byanyima:

'We are in the trenches fighting customs, beliefs social norms – governments don’t do this – it’s us: women’s movements. Patriarchy holds governments, and women are kept out. They use culture and tradition to justify it. It’s norms holding us down.’

Winnie was not alone in her use of norms language. Panelists and delegates in many other sessions called out the primacy of norms:

If Women Deliver and its powerful coterie of presidents, ministers, CEO’s, policy makers and activists can argue for changing norms, we all need to embed this in development policy and practice and national strategies across all sectors.

Of course, not all sessions were explicit about gender norms. Nevertheless, one central message was the importance of addressing norms for achieving gender equality outcomes for individuals and societies and with the support of governments. For those of us who work on gender norms this is a step forward on a grand scale.

‘We have to fight the norms, the informal rules. We want to see governments fight social norms, governments must fight this – it’s a weak link – we must tackle norms.’ (Winnie Byanyima)

The final observation was the lack of men at the conference. They had a presence, but it was not strong enough. The few LGBTQI+ gatherings also commented on the lack of diversity in the panels and this should be noted for future Women Deliver events. In contrast, the recent London launch of the World’s Fathers Report attracted many men to listen to British MP David Lammy, Promundo, and the excellent Dope Black Dads. This report, also launched at Women Deliver, pushes for more support for fathers to play their role in childcare: an important step that should be promoted alongside increased rights for women in all domains. In many contexts a message about father power can only be embraced if it comes along with messages of support and on the ground action for increased women’s rights.

There were many at Women Deliver who feared for the future but saw an opportunity in fighting together against a patriarchy that is bad for us all – women, men and LGBTQI+ identifying people. As one LGBTQI+ identifying delegate put it: ‘we need to have each-others backs now more than ever – the genie of women’s rights is out of the bottle – young people will simply not let it be forced back in.’

Was Women Deliver worth it? I would say yes. Its message about power was vital and has rarely been heard at this scale. It energy has undoubtedly built momentum. It lessons and sessions were challenging, moving, angry and often astute; and its participants were inspiring. We need injections of inspiration and hope right now, and Women Deliver 2019 provided them, delivering on both.

About the author - Caroline Harper 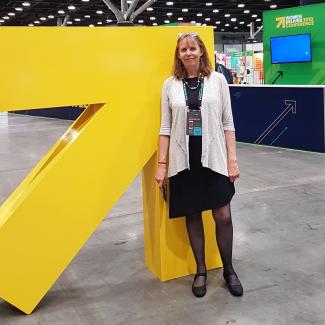 Caroline is the ALiGN Project Director and Principal Research Fellow and Head of the Gender Equality and Social Inclusion Programme at ODI. Caroline has worked on issues of inclusion, gender, age and poverty for over 30 years, including 14 years with ODI, 10 years residence in East and S.E Asia, and previous employments as a consultant and with Save the Children as head of research and policy. She has a PhD in Social Anthropology.

Read more about Caroline and the ALiGN team 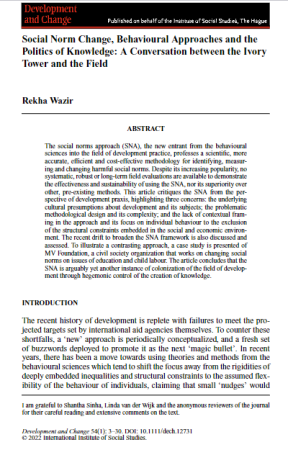 Social norm change, behavioural approaches and the politics of knowledge: A conversation between the ivory Tower and the field
Author: Rekha Wazir